What is the gospel of Jesus?

Most evangelical Christians would say Jesus came to die so that we can be reconciled to God and be with him forever in heaven.  Right?  Yes, and there’s more!  The gospel’s good news is that individuals, communities, and nations who were once enemies can be reconciled.  When we give our lives to Christ, not only do we get a Heavenly Father, we are adopted into a huge colorful global family of brothers and sisters!  This beautiful renewal began with the outpouring at Pentecost in Acts 2 but the work continues today and each of us are invited to be a part of it.

I am of the belief that Jesus lived, died, and resurrected to reconcile 3 relationships—person to God, person to person, and person to land.

My Hawaiian community pictures it like this… the “Lokahi Triangle” 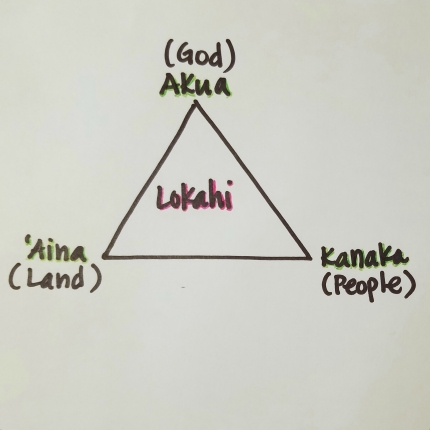 Lokahi (Hawaiian) is best translated using the English word harmony, but could also be described as peace, unity, and agreement.  In this way, each person or community must have a loving relationship to God, land, and people to be in harmony.  If one part is lacking, they’re all out of balance.  This is hard to grasp for those of us from individualistic cultures, but let’s press in and listen.  In the communal way of thinking, if one person is out of balance with God and land, the community is out of balance.  The community works together to preserve right relationship with God, people, and land for the sake of all.

While all three are inseparably important in God’s saving work, in this blog I want to focus on the person to person reconciliation.

Ever since our eviction from Eden and Cain killing his own brother, we’ve been fighting.  Instead of following God’s creation mandate to fill the earth (Gen 1:28), we deliberately disobeyed, dug our heals in the ground and tried to make our name great apart from God, thus building the Tower of Babel (Gen 11).  In response, our gracious God gave us languages.  Like a mother bird boosting her chicks out of the nest, God helped us find our wings and spread out to find our own places to dwell.  We scattered across the earth in clans that developed cultures unique to the landscape and climate in which we settled.  Today we live in communities that make up nations covering the vast continents, yet we have a bloody history of violence against one another.

If the blood of Jesus was powerful enough to cleanse our own blood-stained hands and reconcile each one of us to God, then it must be strong enough to reunite us to one another, person to person and nation to nation.  God’s heavenly Kingdom isn’t just an afterlife destination, it’s a life we live now.  Jesus said, “The Kingdom of God is at hand…” (Mark 1:15).

I’ve been challenged over the years, especially in my work with InterVarsity, to understand this person-to-person and nation-to-nation reconciliation of the gospel.  Paul explains this part of the gospel in Ephesians 2:14-15…

“For He Himself is our peace, who has made the two one and has torn down the dividing wall of hostility by abolishing the law of commandments expressed in ordinances, that he might create in himself one new man in place of the two, so making peace.”

Jesus resurrected to bring all of us into one family under Christ (Ephesians 1:10) and gave the most powerful aid to accomplish this.

In Acts 2, there’s a spontaneous combustion of reconciliation as the Spirit is poured out on the Jewish disciples who are somehow speaking in many languages but only saying it once (however that worked).   This might be understood as a reversal of Babel—the God who scattered the nations by giving languages is now bringing them together as they all understand the same speaker.  In one morning, 3,000 people from many nations are reconciled to Christ!  He does this not by creating one unifying language, but speaking to each one in his own mother tongue as if to say, “Your culture matters to me.”

The result of this great outpouring lasts way beyond the day of Pentecost.  Not only are the people in this multi-ethnic assembly reconciled to God, but they’re also reconciled to one another as they meet daily to eat and fellowship.  Those with wealth sell property to give to those without so that no one is lacking—an economic redistribution (Acts 2:44-47; 4:32-37).  This is the first emergence of an inter-dependent multi-ethnic family of believers in Christ—a picture of the Kingdom of God!

It seems as though nothing can shake this new community God is creating, yet perhaps only months later disputes spark between the Jews and Greeks over whose widows are getting proper services (Acts 6:1-7).  Cultural conflicts?  Prioritizing one group over another?  But I thought all of that was solved with the outpouring of the Spirit?  Didn’t discrimination die at the foot of the cross?  Apparently not.  The Jews still sit in the seat of power and are being unjustly favored.

While the issue of “preaching the gospel” is deemed of utmost importance, God’s family cares about the equitable distribution of resources–if one is lacking, all are lacking (no lokahi).  What is profound is that the dominant Jews choose to share power with the Greeks.  Seven Greek “men of wisdom who are full of the Spirit” are carefully selected, to ensure that food is equally distributed.  Widows are fed, lokahi is restored, and the gospel goes forward.

But then something very unexpected happens—the Gentiles get the outpouring of the Spirit.  Really!?  The Jewish Christians are taken aback and discuss whether they should be allowed to be baptized in water and become full-fledged members of this new church.  God had always favored them over other nations, and Jesus himself was a Jew who went first to the Jews.  The future of the church hang’s in the balance.  Thankfully they decide in our (Gentile’s) favor, otherwise, I wouldn’t know Christ today!   After some intense back-and-forth the Jewish apostles declare that Gentile converts to Christ don’t have to be circumcised and come under all the other Jewish laws.  Again, they use their power not to dominate but to make space for a the formation of a new multi-ethnic family under Christ.  As Paul describes in Galatians 3:26-29,

“You are all sons of God through faith in Christ Jesus, for all of you who were baptized into Christ have clothed yourselves with Christ.  There is neither Jew nor Greek, slave nor free, male nor female, for you are all one in Christ Jesus.”

Interesting that even after the Spirit is poured out, reconciliation doesn’t simply happen spontaneously and effortlessly, but it has to be worked out (Phil 2:12).  Later, there is a role-reversal when the church in Jerusalem, mostly made up of Jews, experiences great need due to famine.  The Jewish apostles collect offerings from Gentile congregations to distribute back to the leaders in Jerusalem so that all are fed and cared for.  Beautiful reconciliation!  In God’s family, everyone is welcome to eat at the table.

What’s the point for us today?  Well, in many nations, including the United States, our cities and even towns have becoming home to people from many different nations of origin.  We have a diverse family of believers in every city!  Yet MLK Jr’s startling observation in 1960’s–“11:00am on Sunday morning is the most segregated hour in Christian America”–is regrettably just as true in 2017.  At the United States dining table, some are over-fed while others go hungry.  As heirs to a gospel of reconciliation, what is God’s vision for the North American Church?  My next blog I will explore this.

If you are inspired by this writing and want to dig deeper, take a look at what I’m currently reading: “The Heart of Racial Justice” by Brenda Salter McNeil & Rick Richardson, 2009 IVP.

3 thoughts on “the gospel of reconciliation”