On Sunday evening I attended an event at Kawaiaha’o Church to pule (pray) for the voyaging ship, Hokule’a (pictured below).  Hokule’a (Star of Gladness) brings the past to life for the Native Hawaiian people.  This traditional double-hull voyaging canoe built in the 70’s is built like the early vessels that carried the Polynesian people from the south pacific islands to their new island archipelago home.  Even more incredible, the crew uses the same navigation system as their ancestors did over 1,000 years ago–the stars. 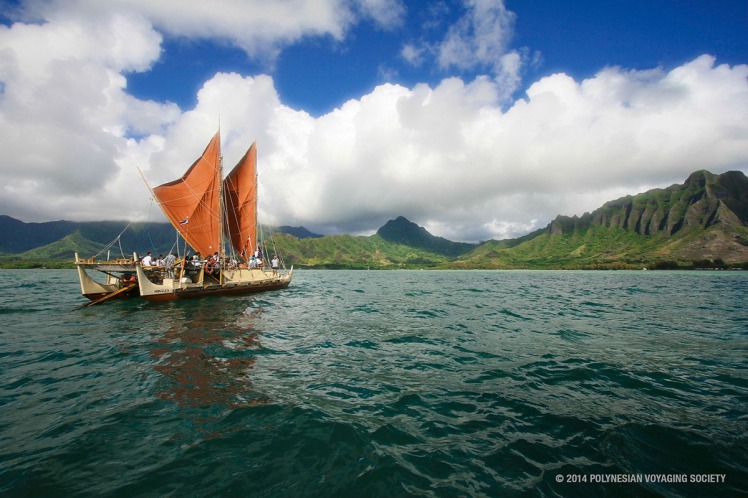 Hokule’a has nearly completed one year in it’s three-year-long voyage to circumnavigate the earth.  You can follow their course on the website.  As I write, Hokule’a is in the middle of the Tasman Sea between New Zealand and Australia.  We gathered at Kawaiaha’o Church to celebrate the legacy of the Hokule’a as part of a cultural renaissance and to pray for the voyage to teach malama honua (care for the earth).

Sitting in the beautiful Kawaiaha’o Church, surrounded by pictures of Hawaiian Ali’i (Royalty), I couldn’t help but feel a sense of wonder.  Here is an island people–so brave and regal–who traveled by canoe farther than any other human beings to come and inhabit the Hawaiian islands.  Hawaii is the farthest point on the earth from the cradle of civilization.  Kahu (Pastor) Curt Kekuna reminded us that Jesus of Jesus’ last words in Matthew, “And this gospel of the kingdom will be preached in the whole world as a testimony to all nations, and then the end will come” (24:14).  And then later in Acts 1:8, “But you will receive power when the Holy Spirit comes on you; and you will be my witnesses in Jerusalem, and in all Judea and Samaria, and to the ends of the earth.”

The first missionaries came from Boston, MA to Hawaii in 1820, bringing the message of Jesus Christ to the “ends of the earth”–Hawaii!  A wave of Christianity spread over the archipelago and within a few decades, the Hawaiian islands were considered about 90% Christian and the missionary’s jobs completed!  Hawaiians took ownership of their new faith and began sending out their own missionaries.

But the story turned sour in 1893 when some descendants of the missionaries and other American businessmen, contracted with the US military to form a coup and seize political control of the islands.  This betrayal by the children of the very people who had left their homes and comforts to bring the good news of Jesus, has left a raw wound in the hearts of the people of Hawaii.  If the gospel is associated with political overthrow and cultural genocide, how can it be “good news”!?  Because of this sad history, many in Hawaii have turned away from the Christian faith.  Today their remains a stark polarization between the Christian faith and Hawaiian cultural practice.  It has been hard to be both Christian and Hawaiian.

During the service, I was struck by the many ways the intersection of faith and culture was referenced.  The opening protocol included a band blowing shofars followed by a man blowing the conch shell (Hawaiian equivalent of the shofar).  Chants and worship songs were given in Hawaiian language, and hula was performed in worship to the Creator.  Kahu Tarita Tehotu from Tahiti shared her personal story of thinking she needed to give up her “pagan” culture in order to come to Jesus.  As she grew in the Lord, she discovered that he wanted her to take back hula and other cultural practices, but this time as redeemed modes of worship to the Creator!

It is beautiful to see a nation return to embrace it’s cultural identity in worship to God.  As the Hokule’a sales with in all her glory, following the stars in the heavens, the folks back home are carrying her with their prayers.  I am honored to be here for such a time as this!

*See my blog post Ke Kai Wa’a to read my poem about an ocean canoe.  God gave me this poem even before I felt called to Hawaii or visited the Hokule’a!

One thought on “Pule for Hokule’a”